Our Slow Response to Automatic Weapons 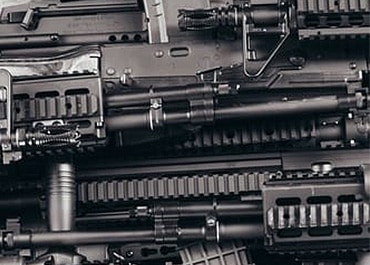 ABC News offers a map[1] showing only ten states avoiding mass shootings within their borders. That means forty, or fifty, state representatives should favor keeping automatic and semi-automatic weapons from civilians. They should vote to protect their constituents from needless bloodshed and sorrow.

This not happening defies reason. No one needs an automatic or semi-automatic weapon to hunt unarmed game. Those weapons exist for one purpose: killing people. The peoples’ representative should protect constituents from a proven threat: people-killing weapons. People-killing weapons should be available only to the peoples’ approved agents: law enforcement and the military. Allowing them to be available to anyone else threatens us all.

Second Amendment protagonists claim its purpose is for citizenry to be armed to fight government tyranny.

Militia members should notice that their arms are paltry compared to the United States’ military. Even a functioning missile silo in your backyard leaves you out-gunned. Armed prancing around the woods in camo-tutus only extends someone’s boyhood fantasy. Or worse, providing a false sense of “manhood” or “patriotism.” It’s not protecting the country.[2]

Tyranny is best prevented by a well-informed populace voting.[3] We expend American lives fighting for “American values” elsewhere. We delight from pictures of first-time voters defying death threats. Yet, only 55.4% of us voted in the last presidential election.[4] Compare this to 42% of people in the US living in households with guns.[5] Shame on us. We’d rather pretend to fight tyranny than actually do so.

Plus, we’re subjecting ourselves to a tyranny. The tyranny of fear and danger wrought by these weapons’ profiteers. Most Americans oppose automatic and semi-automatic weapon proliferation.[6] Still, they persist.

If our representatives voted against us on some other life-threatening issue, we’d deny them another term. That’s what we’re facing. If we don’t want more dead from senseless shootings, let’s do something to stop it.

A nation that facilitates killers may not wring its hands when innocents are killed. We are all culpable if we allow this to persist.

You may not agree with me. VOTE anyway, if not because.