A Remedy For Nervous Post-Petition Suppliers 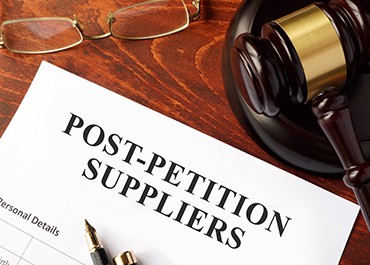 In a recent mega-retail case, our client had outstanding, pre-petition purchase orders (“POs”) for goods the debtor wanted delivered. It’s true that post petition suppliers have an administrative priority to get paid. However, that priority is meaningful only if there is cash available for payment.

In this, as in most cases, lenders had liens on all of the debtor’s assets. The debtor got authority to use the banks’ cash collateral, subject to a budget. However, the budget did not disclose whose sales got paid. It was possible, if the reorganization failed, that the client might not get paid for millions of more dollars in sales. This becomes particularly aggravating, as the post-petition delivery provides more collateral for the pre-petition lenders.

What could be done to make sure the sale occurred with certain payment and not alienating the debtor or the anticipated purchaser of its assets?

Bankruptcy Code § 365 authorizes debtors in possession (“DIPs”) to assume (keep) or reject “executory contracts.” Executory contracts are agreements where the obligation of both parties to the contract “are so far unperformed that failure of either to complete performance would constitute a material breach excusing the performance of the other.”[1]

For a DIP to assume an executory contract, they must provide the contract’s counter-party with “adequate assurance of future performance under such contract.”[2]

POs are executory contracts.[3] Suppliers/vendors can ask the bankruptcy court to enter an order requiring the DIP to decide keep or reject the sales contemplated by POs (a “365 Motion”)[4]. If the DIP rejects the POs, the goods don’t get shipped and the supplier has a prepetition claim for its damages.[5]

If the DIP assumes the POs, the supplier can require “adequate assurance of future performance.” This could include COD payment, letters of credit, or the lenders explicitly authorizing the prompt payment after delivery. It’s simply making sure the supplier gets paid.

It was one month into the case. The debtor didn’t indicate that it was going to do to give the client comfort. We prepared the motion. On the eve of filing the motion, the official creditors’ committee in the case negotiated assurances of payment for post-petition sales. We did not have to file the motion.

A creditors’ committee may act fast enough to protect suppliers receiving payment, without a 365 Motion. Absent such action, nervous pre-petition suppliers with outstanding purchase orders appear to have a vehicle to assure payment for post-petition deliveries.